Learn how to make a Macrame Hair Pin

Macrame is an amazing craft that uses a few different knots to create a multitude of things. Popular items are plant hangers and wall hangings, but you can also make Macrame Earrings and Keychains.

Today I want to show you how to make a Macrame Hair Pin. It is easy to make and does not take a lot of time. But it does look amazing in long hair.

As an Amazon Associate I earn from qualifying purchases. If you make a purchase through my link, I will make a small commission with no extra cost to you. “

Or try my Macrame Necklace tutorial.

How to Make a Macrame Hair Clip

For this tutorial, I used the round hair clip from this amazing hair clip set, but of course, you can also make this pin with heart and oval shapes.

How to dye Macrame String

To give your hair clip that 2 color contrast, you need to dye 2 of the strings. I used regular Food Coloring for that. I really like the neon colors because they give it that extra pop.

Just put place the 2 strings on a piece of plastic wrap. Then put a few drops of food coloring right on the string. Now fold the string up in that plastic wrap and rub the color around until is is nicely saturated everywhere.

To set the color so it won’t transfer onto everything, you need to place it in the microwave for a about 1 minute. After that, let it cool off and take it out of the plastic wrap. Now they are ready to go.

Now attach all 6 strands to the wire frame with a Larkshead knot. Fold a piece of yarn in half and place it under the wire frame. Then pull the 2 ends through the loop to encase the frame with the string and pull tight. Use the blue strings on the outside and the 4 natural colored strings in the middle.

Now it is best to clip your wire hair pin to a clip board so it won’t slide around and you can pull at the strings and get the knots tight.

Divide the strings in half . In the photos, I completed the left square knot and now we are working on the right square knot.. So you are using the 2 natural colored strings.

1st Photo: Place your left string over the 2 center strings and under the right string.

2nd Photo: Do the opposite with the right string by placing it under the center strings and over the left  string.

3rd Photo: And pull tight. This is the first part of the Square Knot.

Now do the opposite by placing your right string over the 2 center strings and under the left right string.

Do the opposite with the left string by placing it under the center strings and over the right string. And pull tight.

Add 1 more square knot in the center below the 2 square knots from the previous row. So you leave 2 blue and 2 natural colored strings untouched on both sides.

Make a regular knot in the center and you completed all macrame knots for this hair pin.

Now you can comb out the cords so all the individual strings are separated. Then either spray the earrings with the stiffening spray or dunk it in sugar water. Wait until they are dry and cut the strings into a V shape.

Now it is ready to be worn! Just clip it to your hair and enjoy your day 🙂

Want to make even more macrame accessories? Check out these Crafting on the Fly creations! 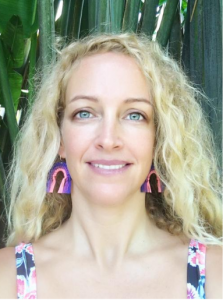 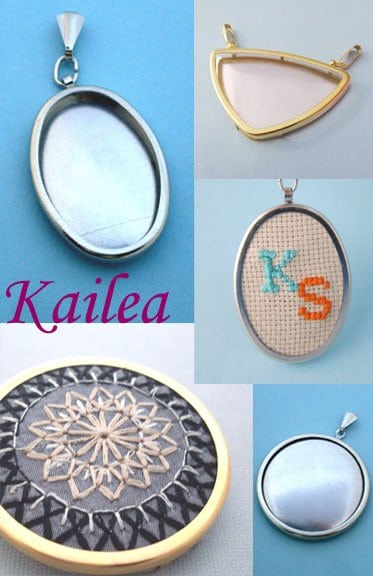